This is a guide focused on collaborating on Android projects together with teammates using Git.

First, you need to properly setup git for your project:

Next, setup a .gitignore file at the root with the contents from this file to ignore files that shouldn't be shared between collaborators.

You can now add the initial files to git using the SourceTree / Github client or by typing:

Next, make sure you have setup a repository on github and then add that repo as the origin:

and now go ahead and push the code to Github with:

You can also use your favorite Git GUI (for example the Github client) to do a lot of this process as well.

The following outlines how to collaborate with others using git. When first starting a session working on a project, we need to pull any updates pushed by other collaborators:

When this sort of conflict occurs, Git writes a special block into the file that contains the contents of both versions where the conflict occurred:

To complete this type of merge, use your text editor to resolve the conflict, then add the file and commit it to complete the merge. In this case, Git has trouble understanding which change should be used, so it asks you to help out. Refer to this excellent github guide to resolve these edit merge conflicts.

New features should be added in special feature branches that allow changes to be made in isolation. First, we can create a new branch to work on:

Now changes can be locally committed to the branch:

You can check your current branch:

and push changes back to github in a branch with:

While working on the branch, be sure to rebase with master to pull in mainline changes:

If there are conflicts, they have to be resolved in the files and then you need to run:

until all conflicts have been resolved.

When a branch is ready to be merged, a pull request should be opened. Make sure your branch is up to data with master with the rebasing steps above. Then push branch to github with git push -u origin new_branch_name.

Go the repository on github and look for: 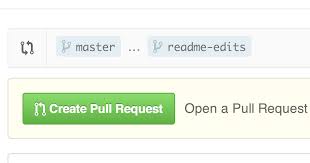 Press "Create Pull Request" and then if there's an associated issue then in the description part of the PR list the issue number you are closing like this: closes #23 to automatically close the related issue when this is merged.

If you have a commit from the past that is working and you made changes locally and want to revert all of your changes since that commit, you can run:

If you want to revert your current code to a past commit:

That it! After running that all of your local uncommitted changes will be reverted. For more information, check out this Github guide on how to revert almost anything with Git.

Often when collaborating on a project with others, you need to have maps work across multiple computers. The problem is that the map key fingerprint is different from computer to computer and thus by default maps will only work on the computer that was used to generate the key.

The simplest fix is described in detail within this stackoverflow post but in short you can get the debug.keystore from one of the team members, check that into git and then instruct other team members to replace their debug.keystore file with the one from repository. See also this link and this guide.